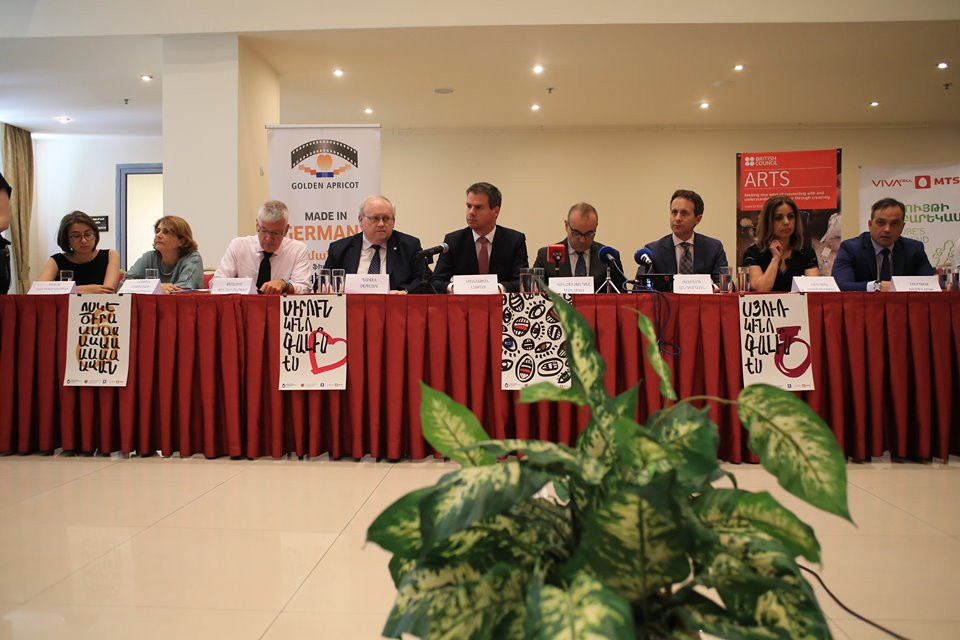 A number of programs will be implemented in cooperation with foreign embassies and international organizations in Armenia within the framework of the 16th Golden Apricot International Film Festival, held on July 7-14 in Yerevan. During a press conference on June 28, foreign ambassadors, representatives of embassies, as well as heads of international organizations presented joint programs to be held during the days of the festival.

Within the framework of the Talent Lab program a 4-day master course will be conducted by the famous film critic, Cannes Critics Week Coordinator Olivier Pélisson and producer Francois D’artemare in collaboration with the French Embassy in Armenia. Within the framework of the French New Cinema program a number of films will be screened, including a farewell film from famous French film director Agnès Varda, and Nadar Lapid’s Synonyms, which was awarded Golden Bear at the Berlin Film Festival.

In collaboration with the Embassy of the Federal Republic of Germany, a series of films will be screened, including Vim Wenders’ latest film dedicated to Pope Francis, Joachim Lang’s film about the famous German actor Bertolt Brecht.

Within the framework of the Talent Lab a 4-day master course with actress Kathleen Leslie will be organized in collaboration with the US Embassy.

In the co-operation with the Embassy, the jury of the festival will feature producer, Director of Tribeca Cinema Institute Amy Hobby.

In collaboration with the Embassy of the Russian Federation, the Russian Center for Science and Culture and the CIS Interstate Humanitarian Cooperation Fund, a program for the CIS countries will be launched, the opening of which will take place on July 9 in Gyumri. The opening ceremony will feature “The Saber Dance” movie about the renowned composer Aram Khachaturian directed by Yusuf Razikov.

Film screenings will be held within the frameworks of the CIS Joint production forum, guests and students from the CIS countries will participate in a joint round-table discussion. Within the framework of the program films of recent years of CIS and projects to in production will be presented.

The Golden Apricot Film Development Fund, together with the Adam Mickiewicz Institute, the Polish Film Institute and the Embassy of Poland in Armenia, will carry out an IN FOCUS: Poland program program within the framework of which events will be held both for cinematographers and the general public. The program will feature eight films, four of which will be the restoration of the Polish classic Wojciech Has, and modern Polish cinematographic samples. The first release of the revised version of Wojciech Has’ ” Pożegnania” will be presented in Armenia. The opening of the Polish program will take place on July 8 with movie The Hourglass Sanatorium. Leading actor Jan Nowicki will attend the film screening. Simultaneously with the exhibitions, the Moscow Cinema will also feature the presentation of the movie posters by Wojciech Has.

On July 5-9 intensive film training will be held for six cinema projects. In addition to this, film experts invited from Poland will speak at different discussions, conversations and share their experiences with their Armenian counterparts.

In cooperation with the Embassy of Italy in Armenia a tribute will be paid to the famous film director Bernardo Bertolucci, the film “Dreamers” will be screened. Filmmaker, Paolo Bertolin, member of Venice International Film Festival’s election commission, is among the juries of the GAIFF. Italian film director Pippo Mezzapesa is included in the jury of the regional short film competition,

Within the framework of the festival together with the Swedish embassy, President of Women in Film and Television International, producer Helene Granqvist will arrive in Armenia and will present a speech on gender equality in cinema.

Golden Apricot Yerevan International Film Festival continues its traditional cooperation with British Council Armenia. This year’s programme includes a masterclass which will take place on 8 July at AGBU and will be held by Elizabeth Karlsen, producer of the British ‘Collette’ which was premiered in Yerevan as a Gala opener of the European Film Festival in 2018. The next day, on 9 July, Elizabeth Karlsen will deliver a presentation for the representatives of the cinema industry at the Parajanov Museum, where she will highlight the image of women in her films. During the event, the British producer will be awarded special prize of the Golden Apricot.
©GAIFF Pro